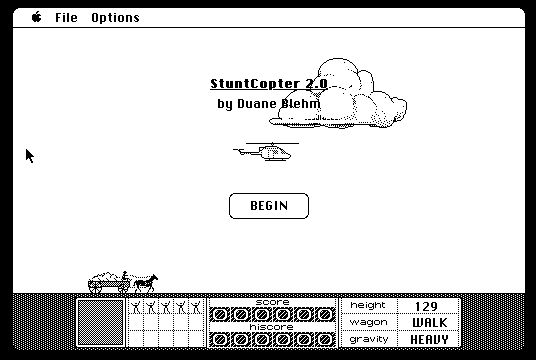 Duane Blehm was a Macintosh developer who produced several popular games in the the mid-1980s before sadly passing away aged 36 on 6th June 1988. His death was publicly announced in the Delphi Mac Digest of 12th July 1988, posted to Usenet (comp.sys.mac.digest):

I am posting this note for Duane's Parents  .......  for those of us who
knew Duane and admired what he could do with a MAC .... we are going to
miss him, his talent, his toughts, and most of all his friendship  ...

We are working on the KEYCODES for his games . . . If (he was clever)
figure out just how he did it .... we have his parents permission to
post it for public domain .... As those of us who knew Duane - - he
never really tried to get rich or rip anyone off ... only to cover
expenses and have pocket money ... Those orders recieved after his death
will be returned with the money sent in and hopefully a KEYCODE ... bare
with us.  For those of you who wrote in and were personal .... I know
you got a personal note back   ...  a touch with a genious ...

Blehm released his games via his own publishing company, HomeTown Software, located in Kansas. Blehm's releases include; Stunt Copter, Cairo Shootout, ZeroGravity, and PUZZ'L, all of which are included and playable in this emulated item.
Interestingly, Blehm was in the habit of sharing the source code for his games after release. As suggested in the above obit, and discussed in this 1993 Usenet thread, his parents were unable to fulfill orders for source code following his death. In 2016, Pete Gamache fulfilled a decades-long mission to acquire Blehm's source code by reaching out on Twitter to John Calhoun (creator of legendary Macintosh game Glider) and released it all here. I have added a zip file containing the source code (sourced from Macintosh Garden) to this item.

An odd game where you try to stay inside a circle and do flips in the middle against the forces that pull you out to the sides. It sounds odd, but is a true classic.

Cairo Shootout belongs in a group of different genre's with an arcade styled shooting gallery crossed with an egyptian game, the idea was to shoot a certain amount of tiles on the screen using the pointer, it even has some rather strange sounds to go with it.

Drop the stuntman into the haywagon, but don't hit the horse or the driver.
CompatibilityArchitecture: 68k

PUZZ'L is a nice and complete puzzle maker and game.  You can copy/paste your own graphics and instantly turn it into a puzzle that you can play.  There is an embed timer and you can change the size and background color of unplaced piece.
CompatibilityArchitecture: 68k